The stock market closed out the decade in style and on a high note! It was a great year for 2019, with the S&P 500 showcasing a 31.5% total return, which is the second-best annual reading since the Great Recession. Additionally, 2019 was the 2nd best total return figure since 1997, which was the middle year of the best 5 year run ever for the market.

The year also capped off a decade that was fantastic for stock investors. The average annual total return this decade for the S&P 500 was 13.6% versus 10.4% for the historical average.

All major domestic indices enjoyed a stellar year in 2019, with the technology laden Nasdaq Composite leading the way with a total return of 36.69%. Following the Nasdaq’s lead, the Dow Jones Industrial Average and small cap Russell 2000 Indices were up 25.34% and 25.52%, respectively. International markets were pulled up as well with the developed international market MSCI EAFE Index up a total of 22.01% and the more volatile MSCI Emerging Market Index up a total of 18.42%.

As many naysayers waited for a recession and a bear market in equities, the economy and stock market adjusted positively to the Fed rate cuts and dovish tone of the Federal Reserve. In a year that we witnessed three quarters of negative earnings growth, slower global economic growth, political uncertainty in Europe, and the US impeachment inquiry, the US economy remained incredibly resilient.

For the year, the US Economy registered a slower level of growth but remained on a path to stretch the expansion to a new record. In fact, for the first time in the post World War II era, the US Economy went a full decade without a recession. If estimates for the 4th Quarter GDP hold true, the economy grew 2.3% in 2019. While anemic historically, 2019’s growth in the midst of a contraction in manufacturing and a full-blown trade war was a true testament to the dynamic US Economy. It was even more of a feather in the cap of the US consumer. As industrial output and business spending slowed, consumer consumption maintained its robust momentum buoyed by a 50-year low in unemployment and wage gains, that both provided support for growth in purchasing power.

The Federal Reserve reversed its hawkish course early last year after the markets were pummeled as noted in our Mid-Year update. As a result, the yield curve adjusted to its normal structure from an inverted state and asset prices including stocks began to re-accelerate.

One of our annual themes for 2019 suggested that the Fed would be more aggressive with several rate hikes in 2019 as they commanded their independence. We missed the mark on that prediction as the Federal Reserve and other powerhouse nations simultaneously provided an immense level of liquidity and stimulus.

We fared much better on our other themes for the year including the suggestion that geopolitical tensions would escalate with Iran. Most consequential was the suggestion that the US economy would avoid a recession and that we would see an amicable trade settlement with China. While the deal with China is only in its first phase, it shows progress in the biggest hurdle the global economy faced for the year.

In the end, 2019 was a critical year with outsized performance in a very harsh and sometimes toxic environment. For many short-sighted investors, pessimism, skepticism, and lack of long-term conviction are the norm. We witnessed quite a few real-life cases where professional investors made radical decisions to go to cash and in several instances actually bet against the market using leverage. Timing the market can be a futile and dangerous endeavor. At Parrish Capital, we maintain our disciplined approach that focuses on time horizon, high quality investments, and conviction in the capital markets.

“As the crow flies” alludes to the fact that the distance between two points is typically shorter in a straight line. In reality, the physical path to your destination is generally longer considering the terrain i.e. mountains, curves in the road, or bodies of water. The path to a promising year for the economy and capital markets seem pretty straight forward given the backdrop of the accommodating world central banks, a probable reacceleration of economic growth at home and abroad and a resurgence in corporate earnings growth. However, the road to the end of the year will be arduous, tense, and tumultuous.

The US Economy has been the beacon of stability for the global economy over the past few years. While economic growth has not been blockbuster, we have managed to ward off the increased possibility of a recession. At Parrish Capital, we believe that 2020 will be more of the same, albeit with more positive contributions from various US economic pockets and other global economies. We are increasingly mindful of where we are in the business cycle, but we feel the US Economy has enough momentum to sustain a 2 plus percent path of growth.

As noted above, we have made progress in the trade war with China. We are generally optimistic that some relaxation in the trade tensions with China could potentially spur reacceleration of global economic growth. However, as we go to press with this newsletter, the outbreak of the Coronavirus has brought the Chinese economy dangerously close to a complete stand still with many US multinational companies affected.

The outbreak, while sudden and exogenous, will undoubtedly erode a portion of our expected reacceleration of growth in the near term, especially for the Chinese economy. With recent history as a guide, near pandemic episodes when brief have only caused minimal damage to the capital markets. We remain positive that the Coronavirus scare will be short-lived and that full year economic growth will not be totally derailed.

The US Consumer has and will continue to be the backbone of our growth. Growing wages, optimal debt, and higher savings rates all contribute to the health of the consumer and breeds greater purchasing power. In addition, better visibility and progress in the Trade war with China has fostered business sentiment which increases the chances that business capital expenditures will rebound.

The Federal Reserve has sacrificed its independence, or so it seems given the dramatics of the media both conventional and social. We ardently feel that the dynamics of the economy, the capital markets, and the global financial system is such that the Fed needs to adjust and always maintain liquidity at all cost.

Just as important, bond issuance to support fiscal deficits has forced the Fed to increasingly expand its balance sheet. In other words, we feel Fed policy and interest rates will be accommodative through 2020. Also, it would be totally against the norm for the Fed to be less than accommodative in an election year. We feel that this will be very good for the economy and asset prices in the near term. However, we must remain cognizant of the potential inflationary pressures or that the punch bowl will be taken away.

2020 is an election year. There are many interesting quotes, statistics, and scenarios that we can share regarding election years. However, we choose not to today!! The capital markets react to perceived threats or things that will impair growth, structure, and the bottom line. It is impossible to know exactly what will happen, but the one factor that matters in the near term before and after the election is visibility.

As mentioned at the beginning of the current administration’s term, we like to own great companies that any fool can run because at some point a fool will be running it. We feel that the United States is like those great companies that we so love. We have flirted with disaster in the past only to resiliently come out on the other side stronger and better because of it. It seems we are always at an inflection point, but somehow, some way we always come back to a relatively happy medium. Today is no different.

More important than the theatrics of the looming election is the current path of earnings growth for US corporations. The market thrived amid a slight corporate earnings contraction last year and the table is set for double digit growth in earnings for 2020. Based on projected earnings of 10% in 2020, the markets look fully valued at best. Against 2021 estimates, the market looks somewhat attractive from a historical perspective trading right at 17 times earnings.

For 2020, we are expecting a solid but extremely volatile year for the stock market with earnings growth reaccelerating, an exciting election season, and fears of coronavirus fading. At year end, we expect the stock market to finish ahead low to mid double digits. We realize that the tide will not always lift all boats. We feel our focus on growth and value stocks at reasonable valuations is a lower risk approach in the current environment. Our portfolios consist of companies with better balance sheets, higher dividend yields and optimal operating leverage. Most importantly, they have the financial wherewithal to survive and thrive in adverse environments. Our major market themes for 2020 include:

If your financial situation has changed, please contact your associate at Parrish Capital to update all changes. It is important to have all relevant details of your financial world updated periodically. If you have not gone through the financial planning process, please make that a consideration in 2020.

Go to ParrishCapital.com or email us at info@parrishcapital.com with questions. As always, ignore the noise, stay focused, and may prosperity be yours. 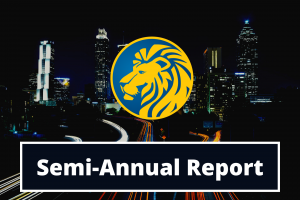 Sleeping Tight  As we reflect on the first half of 2022, we feel it is important to reaffirm the benefits of your long-term strategic investment